This winter has been a bit slow to pick up and snow has developed very slowly… if at all. The reason is some strange weather patterns we had since December 2016. 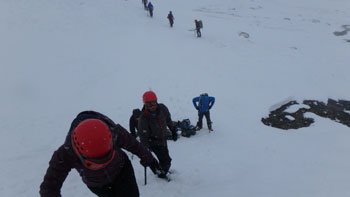 What we need to get a good winter in the mountains is a good dump of snow, followed by sub zero temperatures in the mountains. Then even a mild day or two don't make much of a difference since all the snow would have been consolidated well.

What happened this year was a pattern of snowy day (typically one or 2 days) followed by a rapid rise in temperature to somewhere between 3-10C and most of the time with rain. This stripped all the fresh snow and then it dropped the temperature without having any snow to consolidate. This happened repeatedly during December and January.

In February it has started to become a bit more wintry and our first scheduled winter skills course of the season has looked and felt a bit more wintry. even though we had to walk a fair distance to get to some proper snow. Lets hope that the winter will stay cold now.

Have a look what we have been up to recently. You can also follow and share the blog posts.