First of all the price seems too good to be true. The RRP is £85 is already quite good but we got them for £65. If you compare that with Grivel, it would be only one pair of G12 for £135 RRP then. With the CT Nuptse crampons you also get a crampon bag which is another tenner or so for all other brands. Now money is not everything and you may think that they would fall apart like some of those crampons from Eastern Europe. Well, that's not really true, they have to comply with UIAA standards just like every other manufacturer or otherwise you wouldn't be able to buy them in shops in this country. 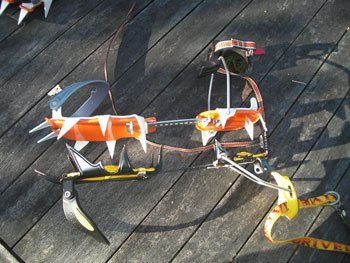 At first look they look a bit more funky with grey and orange, than the usual black and yellow. The material is certainly a bit cheaper than their rivals and the finish is not as slick. For example; Grivel crampons have antiball plates with riveted loops and hooks to fit them on crampons. The CT crampons have very basic plates with moulded loops for fitting. Even though they haven't come off yet it seems to me a slight flaw, which may come undone quicker than the more expensive type. However, this design of crampons doesn’t ball up as much as some of the steep ice technical crampons.

Fitting them on my old Scarpa Manta was a doddle which I would expect from Semi-Autos (C2) crampons. They fitted nice and snug and the adjustments are very similar to what you expect from Grivel crampons. Walking with them on neve snow is just as secure as with any other crampons. They hold up nicely on French, American, downhill and front pointing. The slightly shorted secondary front points mean that front-pointing on ice is a bit harder but then their main function is to just balance your crampons at the right position. The side points are good and adequate for any hillwalking and up to Grade II/III mixed climbing. Not once they were getting loose or shifted in position.

To take them off was very easy again. Just like all crampons now with double rings they have a wee strong to pull on to take them off.

Our verdict is most certainly, a thumbs up for the Climbing Technology Nuptse. They do everything you would expect from C2 Crampons. The 12 point design holds up to the standard and all the metal work is of good quality. The cost cutting can be seen in the antiball plate and the finish of some parts. The price certainly makes it a very inexpensive alternative to the usual suspects. They are more comparable with Grivel AirTec than G12 in design and use. We will certainly stick with them in future. They are more than adequate for client use and hillwalking in Scotland.

Have a look what we have been up to recently. You can also follow and share the blog posts.